In parshat Balak, we meet the character of Bilaam the sorcerer. The midrash compares Bilaam with Moshe.

Bilaam as Foil for Avraham


Yet, as Rav Ari Kahn points out, a close literary analysis suggests that it is Avraham, not Moshe, we should be comparing him with. To summarize his major points: 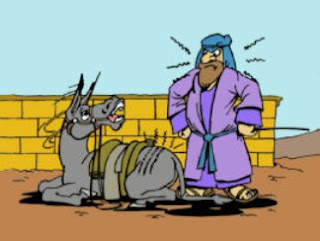 
Yet, despite all of the similarities, there are also key differences between the two. In fact, if we look closely, Bilaam's journey parallels that of Avraham in the Akeida:


A Parody of the Akeida


Ultimately, what parshat Bilaam offers us is a parody of the Akeida, performed by a poor imitator of Avraham. The parallel is clear enough, the question remains: Why does the Torah chooses to provide us with this bizarre reenactment of the Akeida as a Comedy of Errors?

As we already noted, our story is about Moav and Midyan trying to better their lot among the descendants of Avraham's household. Hashem's answer is a farcical version of Akeidat Yitzchak. The message is clear, it is not only Avraham that God singled out as worthy, Yitzchak, the object of the Akeida, was also selected. Bilaam's bumbled reenactment of the Akeida demonstrates that he is no Avraham and Moav/Midyan are no Yitzchak.