Megillat Esther has a number of literary parallels with Sefer Daniel, and by extension with the story of Yosef in Egypt. Let's go over these parallels and what they might mean. 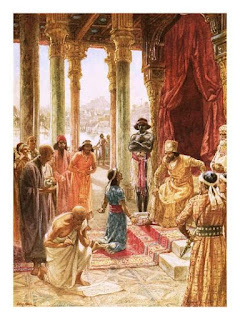 Both Daniel and Esther belong to the Near Eastern genre of Court Tales, focusing on a wise courtier and how he/she prevails over danger. In the Book of Daniel, Daniel and his companions use their wisdom to become personal advisors to the king in a rags-to-riches story. Their courtly rivals repeatedly attempt to do away with them, but they are miraculously saved each time.

Similarly, in Megilat Esther, Esther starts out a Judean orphan but finds herself marrying the king and becoming queen over the Persian empire. Haman plots to kill Mordechai and the rest of the Jews, but he and Esther overcome her rival courtier's murderous plots.


The book of Daniel begins in the first generation of the Babylonian exile with our four heroes, Daniel, Hanania, Mishael, and Azaria, who have been taken from the Judean nobility as captives. They are brought into the Babylonian court to serve as advisors to King Nebuchadnezzar, yet they manage to maintain a certain separateness from their Imperial counterparts. The story features many parallel with Yosef in Egypt, the original captive-made-courtier.


In contrast, the book of Esther takes place over a century after the Babylonian conquest of Jerusalem, after the fall of the Babylonian Empire and well into Persian rule. Nevertheless, the text associates Esther to the Judean exile, though Mordechai, thus setting her up as the Daniel/Yosef character.


Note also, that the text contains other parallels, with all three emphasizing the good looks of the protagonist, as well as their dual Hebrew and local names. 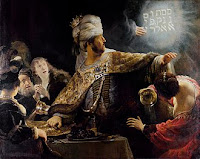 In both Esther and Daniel, the king throws a wild party, has too much to drink, and makes a fateful decision.

In the fifth chapter of Daniel, Belshazzar throws a great party, has too much to drink and orders the Temple Vessels, looted during the conquest of Jerusalem, to be brought out and used in the course of the party. As a result, God punishes him and ends his reign, in favor of the Persians.

In the opening chapter of Esther, an intoxicated Ahasuerus calls for his wife to make a humiliating display before his friends, then chooses to de-throne her as punishment for her refusal to appear. This triggers Esther's rise to power. There is even an ambiguous reference to the vessels used in this party that implies a connection with Belshazzar's own folly.

In the first chapter of Daniel, the lads find favor in the eyes of the Court Eunuch appointed to their care. As a result, he allows them the kosher diet they request.


Similarly, when Esther is brought into Ahasuerus' harem, she finds favor in the eyes of the Chief Eunuch, who provides her with better perfumes and food, thus establishing her role as the Daniel character.

This is all parallel to Yosef's experience with the warden in Egyptian prison:

Risking One's Life for the Cause

One part of the Megilla that has always perplexed me is the degree to which the Megilla emphasizes the danger Esther is putting herself in by approaching her husband, the king in chapters 4 and 5. Can he really be so inaccessible to her? Do we really expect him to order her death if she approaches him uninvited? After all, he only recently had to deal with the fallout of executing his first wife in a drunken rage- isn't he going to be careful not to repeat this folly? Isn't all the fasting and prayer in anticipation of this meeting a bit overstated?

But once we note that Megillat Esther is drawing inspiration from Daniel, it makes sense. Daniel had his Lion's Den, and Esther needs a parallel life-or-death trial.

Note also, that both works include the challenges of surmounting a strict legal system whose laws cannot be revoked or overridden.

The Fate of the Rival Courtiers

In both narratives, the rival courtiers are punished with the very same fate they had planned for our hero, together with their families.  Haman and his sons are hung from the gallows he had built for Mordechai, and Daniel's rivals and their families are thrown into the same lion's den he spent the night in. 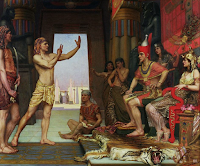 
The Reason Behind the Intertextuality?


Now that we have covered the extensive parallels between these works, let's try to understand the meaning behind these parallels. The story of Esther presumably takes place over a number of years. Why does the story focus on scenes that parallel those in Daniel? Why are there so many literary nods to Daniel and Yosef's stories? Why did Queen Esther make these literary choices for her Megilla?


God's Place in the Narrative


Our sages have noted the lack of any explicit mention of God in the Megilla. Does that mean it is a secular story of courtly politics?

Perhaps it was unseemly for a Persian queen to mention the God of the Hebrews in her personal annals. As such Esther contains no mention of God in the text. But what about the subtext? By encoding references to Daniel and Yosef, stories where God's role in the hero's success is explicit, the Jewish reader will get the hidden message that Esther's success was also thanks to God intervention.


The text's equating between Esther and Daniel/Yosef is also a statement on Esther's legacy. Esther could easily have been viewed as a Shimshon-like character: as a morally flawed individual who nevertheless served God's purposes and saves the Jewish people from their enemies.

Esther was a poor girl, taken as a royal concubine. She ultimately out-concubine's all the other concubines to become the wife of a notoriously lecherous Gentile King. Is she such a sterling Jewish heroine? Do we want our daughters to emulate her and become Great Concubines as well?

By equating Esther with Daniel and Yosef, archetypes of Jewish Faith in Exile, Esther joins their ranks. Yes, exile is hard, and may entail certain compromised circumstances, but ultimately we view Esther as a legitimate Diaspora Leader who put her life on the line for her people in the service of God.
Posted by Nadav at 22:52