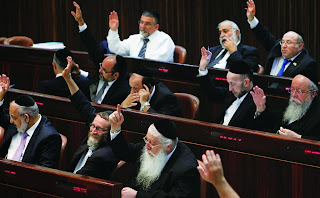 The gemara (סנהדרין ג ב) decides after some discussion that all rulings follow the majority opinion among the judges.

So let's say we have a case and the judges don't come to a unanimous decision. How do we relate to the Majority and the Minority opinions. Rav M. suggested two possibilities:


We see that, unlike Judicial Rulings, Halachik Rulings are not always ruled in favor of the majority opinion. For example, the gemara(יבמות יד א) which says that Beit Shamai's sharp intellects nullify the principal of majority:


To explain this gemara, the Ramban(סנהדרין לב א) differentiates between Judicial Rulings and Halachik Rulings:


The Ramban's opinion seems to be based on the distinction above. Halachik Rulings are solely about finding the truth, so a person can follow the majority, or the wisest sage--whatever seems correct to them in this particular case. Judicial Rulings, on the other hand, also have a strong communal/political aspect, so following the majority is the only appropriate method of decision-making.
Posted by Nadav at 10:03 No comments:

Categories of Monetary Cases in Halacha and Common Law

So, why are criminal cases viewed as generally more serious than civil cases? The main reason seems to be that it's considered more serious to commit an offense against the State than against an Individual. This idea is easiest to understand in a Democracy, where the rules of the State represent, to some degree, the rules of Society at large. A Civil offense primarily wrongs one's fellow, while a Criminal offense wrongs Society itself.

On could suggest that Friedrich Hayek would disagree with this distinction. In his book Law, Legislation, and Liberty vol. 1 Rules and Order(1973), Hayek distinguishes between Legislation and Law. Legislation is a rule the government made, while Law is a sort of Natural Law that emerges spontaneously in a Society. There's a good deal of overlap between these two categories, but both include rules not contained by the other.  As such, one could imagine a piece of Criminal Legislation which doesn't fall under the category of (Natural) Law, and in that case one might argue that one isn't really wronging Society. For instance, in Eureka, Nevada it is illegal for men who have mustaches to kiss women. Now I doubt that this piece of Legislation is still enforced, but were someone to be tried for it, one could certainly argue that when this rule ceased to be a (Natural) Law, one who transgresses it is not viewed as wronging Society.

I would reject this difficulty from Hayek for two reasons: 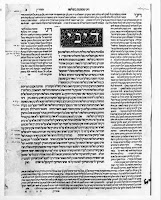 
So, who is the Plaintiff in these Halachik categories? In the case of both גזילות וחבלות and הודעות והלוות it is an individual claiming damages. So the above distinction, between harming an individual vs. harming society does not seem to apply here. So why are גזילות וחבלות considered more serious than הודעות והלוות? As we suggested previously, because גזילות וחבלות usually begin with violence and/or illicit intent, whereas הודעות והלוות are non-violent and are often cases of misunderstanding of the law by one or both sides.
Posted by Nadav at 01:52 No comments:

Here's the summary of the first part of the third and final shiur on the first sugia of Sanhedrin.

The Two Sides of the Debate


So last time we mentioned the debate over what is the Torah requirement for the number of judges needed to hear a case of הודעות והלוות:

The gemara(סנהדרין ד ב) brings a baraita which seems to contradict both of these opinions. Here we discover a new track, a מומחה לרבים, which doesn't require 3, even מדרבנן:


So how do we explain this according to the two opinions?


This works for Tosfot(ד"ה ואם) but Rashi(ד"ה דן) only quotes the רב אחא side of the machloket.  So why does Rashi think the baraita is incompatible with Rebbe Abahu/Rava?

Rav Markus suggested that it's because Rashi understands that Rebbi Abahu always requires a Beit Din, so it's inconceivable that Chazal would ever reduce the requirement to a single judge, according to him. 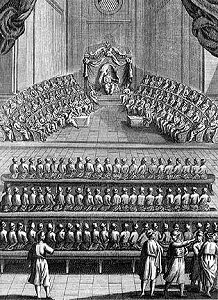 Well, with Winter beginning, I started attending Rav M's excellent gemara shiur at Yeshiva Ruach Tzfonit once again, so I'll be posting a few notes on individual lectures. Right now we're starting מסכת סנהדרין and this past Thursday's shiur touched on a number of topics.


The first mishna in Sanhedrin begins listing the sorts of cases tried in front of a Beit Din of 3 judges:

The gemara(ב:) immediately asks why the two are mentioned as separate categories. We ultimately hear two answers, that of Rebbe Abahu and that of Rava(on ג.) But while they have a debate on how to read the text of the Mishna, they agree that there are two separate categories:

Why should these be seen as different categories? Rav Marcus explained:

One difference between the two categories that the Sugya mentions is how many judges are required to hear a case, with גזילות וחבלות requiring 3 and הודאות והלוות requiring only 1.

So basically, we have 3 understandings of what the torah requirement is to judge these basic casesThese requirements are for an official בית דין, but if the litigants agree they can choose whoever they want to adjudicate their disagreement.

The gemara says that judges must not be הדיותות, and Rashi explains this means they must have סמיכה. Rav Marcus then skipped ahead to the story of Rebbi Yehuda ben Baba giving his life to defy the Roman decree against smicha. Why is it so important? Why does the Torah require it?

The Rav suggested that it is not just a question of being knowledgeable. One who has smicha has been chosen to represent Hashem's schina. He has been appointed to fill a spiritual/communal position.

According to Rebbe Abahu/Rava, Chazal reduced the number of judges required to hear הודעות והלוות. The question remains: How can they override the Torah requirement? By what mechanism do they do this? The rishonim propose two different options:

The Ritva's answer is based on the gemara in גיטין פח:, in the case of כפיית הגט. The Ritva understands that there is a category similar to, but less than smicha called שליחותיהו עבדינן. Basically, even though they didn't give us smicha, the סמוכים gave a הרשאה כללית, a general provision, allowing חחמים who don't have smicha to act as a proxy in their absence.

Why does the Ran reject this answer? My assumption is that the example there actually had living סמוכים to rely on, while in our case we assume that this special provision applies even though there are no smuchim.

The Ran, on the other hand, says that actually the 3 non-סמוחים are not aren't judging, by the Torah definition. Rather, a beit din has the power to take or reassign anyone's money, so they are using that power to enact their judgement.
Posted by Nadav at 09:03 No comments:

Well, now that we've looked at the scope of Maakeh and Lo Tasim Damim, let's look beyond them. Even where these mitzvot don't apply, others may.


The Rambam brings another, broader mizvat aseh into the picture in after introducing Maakeh(רוצח יא:ד)


The pasuk is a curious one to bring, since it sounds more like a warning to keep the mitzvot, than a mitzva to remove hazards:


The source of this drasha is unclear and it appears to be of the Rambam's own invention. The pasuk implies that protecting oneself is a good thing, so even if we don't have a formal mitzva to do so, the Rambam regards this statement of value as halachically binding. 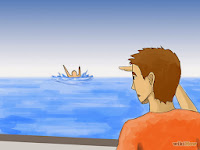 The Sefer Hachinuch counts this as an independent mitzva and describes it as an obligation to save the life of our fellow Jew who is in mortal danger.

This seems like an obvious choice, so why didn't the Rambam bring this pasuk? Perhaps because it is a לא תעשה so it only extends Lo Tasim Damin, not Maakeh.

One answer that I've heard(I think from Rav Michael Edrei) is that the torah wants us to be more careful in our own home. Normally, we wouldn't be obligated to put up a guard-rail on the roof, since the roof is a place people rarely go, and when they do, they know to be careful. Nevertheless, the Torah gave a higher standard for the home.

Another answer is that these general mitzvot only cover mortal danger, while Lo Tasim Damim also coveres injury.

Another answer is that לא תעמד על דם רעך is only concerned with others, while Maakeh and Lo Tasim Damim also are concerned with your safety.
Posted by Nadav at 22:26 No comments:

Another question that arises when discussing the scope of mitzvot Maakeh and Lo Tasim Damim is whether they just apply to fixed structures, or to all hazards in general. The question arises because the pasuk and the examples given in the sifrei all seem to focus on structures like buildings and pits.


Rav Moshe Taragin claims there are two shitot, regarding Maakeh, although they agree about Lo Tasim Damim:

Rashi(בבא קמא צא:) implies that both mitzvot apply generally, even to a mobile hazard, like a dangerous animal.

The Yam Shel Shlomo indicates that Maakeh applies to a fixed structure, while Lo Tasim Damim applies more generally, even to mobile hazards.

I have to admit, that looking at the gemara, I not certain that Rashi is even talking about Maakeh. The source seems pretty ambiguous to me, but it is certainly possible that I'm missing some detail that Rav Taragin doesn't mention explicitly.


Back to the Question of Connection


Regarding the Yam Shel Shlomo's opinion, our take on the Netziv seems to apply: namely that in the pasuk, Maakeh is stated as a specific mitzva, while Lo Tasim Damim sounds more general, and therefore they have different scopes.

Similarly, Rav Taragin's understanding of Rashi is like the Ramban, who thinks the scope of the mitzvot are connected. The only difference is that, while the Ramban contracted the scope of Lo Tasim Damim, Rashi expands the scope of Maakeh.
Posted by Nadav at 22:59 No comments:

So, previously we established that there is a debate whether mitzvas of Maakeh and Lo Tasim Damim are or are not essentially linked, with the consequence to what degree they cover the same cases. Now we'll take a look at a related question: what cases do these mitzvot actually cover?

The basic case is that brought in the pasuk itself, that of a house with an accessible roof, where the  obligation is to add a guard rail. Once we move beyond that case, then the questions begin. We'll start with the question of severity and then cover other questions in future posts...

So are these mitzvot concerned with hazards that can cause any injury or just lethal hazards?


Most rishonim understand the gemara(בבא קמא נ:, נא.) and it's 10 tefach limit as implying that these mitzvot are only concerned with hazards which might cause death.  As the Meiri says there(ד"ה בית)


On the other hand, there is the baraita of Rebbi Natan, brought several places in the gemara(בבא קמא טו:,בבא קמא מו.,כתובות מא:), and used in discussing cases of potential injury, not death:

Rav Soloveichik, on the other hand, explains these gemaras according to the other shita, saying that chachamim made a gezeira extending the issur to include nezikin.