Recently I began a project to learn sefer Daniel with the 929 site. Daniel is a book that always held a certain appeal for me, perhaps because of the memorable stories, perhaps because of the strange allure of Aramaic language and Babylonian culture. As such, for the past few weeks I've been working my way through the book, so this will hopefully be the first of a few posts on the topic. Note: I'm dedicating this series to my father, Zwi ben Yakov. May Hashem grant him a speedy and successful resolution to his current medical issues.


Let's begin with the high-level structure of Daniel. The book has 12 chapters, which I have summarized as follows:

As you can see, Daniel is a rather Eclectic work of literature. It's chapters comprise different languages, different timelines, different narrators, even different heroes. Is this a literary choice, reflecting the virtual Ziggurat of Babylonian culture the exiled Judeans found themselves thrown into? Does it reflect a history of editing and revision, as new stories were added to an existing text? Or is simply a collection of Daniel's writings, written at different periods over the course of a long life?

What is generally agreed upon is that the Book of Daniel is divided into two distinct parts: 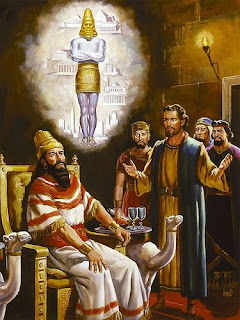 The first 6 chapters take the form of Court Tales, which Oxford Reference defines as:


A popular genre of the Persian and Hellenistic periods...that emphasize the wisdom of the courtier, often in settings of danger

They seem to be in chronological order, at least in that they begin with King Nebuchadnezzar, move to Belshazer, and end with Darius. The stories are written mostly in Aramaic, with a third-person narrator, and Daniel as the protagonist. The exceptions are:

One final point is that these stories seem form a cohesive unit, with intertextualities between them, such as: 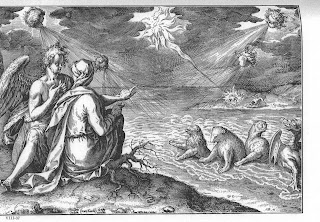 The last 6 chapters are a collection of four dreams/visions Daniel has seen. They are a less cohesive unit than the first part of the book:
The general theme of these visions is the rise and fall of Babylonian, Persions, Greek, and Roman empires according to God's decrees, as well as the rebuilding of Temple in Jerusalem and return of the Judean exiles.

Rabbi Yonatan Grossman argues that Chapter 7 actually belongs to the first part of the book. One reason he gives for this is that it is written in Aramaic, just like chapters 2-6. The other reason it that chapters 2-7 thereby form a chiastic structure.


What emerges is a series of stories about lone Israelite exiles surviving among the Babylonian/Persian court. Rather than being subsumed by or trampled under the dominant culture, they hold to their faith and even thrive, dwelling among the halls of power, while their host Empires rise and fall by God's decree.
Posted by Nadav at 03:44